PrevPreviousThe lion, the writer and the wardrobe…
NextWhere were you on 9/11?Next 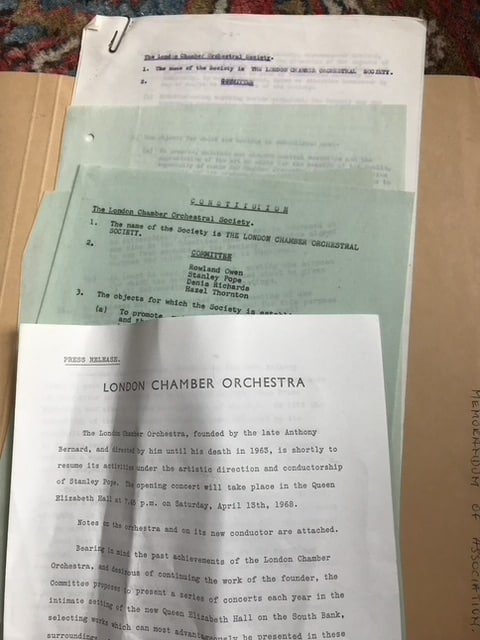 So far so good: I’ve reached the middle of my book about the LCO, complete with the swinging sixties and suspect seventies.

I’ve had to kill off our first hero, Anthony Bernard, the founder-prequel to that present-day orchestral Luke Skywalker, Christopher Warren-Green. Between their two sizeable reigns, there’s a period of almost-no-man’s-land we could call the ‘interregnum’.

The idealistic Mary Bernard, Anthony’s widow, remained convinced that if the orchestra’s performances were high enough quality, everything else would simply fall into their laps: record contracts, BBC broadcasts and national celebrity. If only.

Mary had reckoned without one thing: when the LCO started out, it was the first and only chamber orchestra in the country. By 1970, there were more than 20 others, some of them receiving what now seems lavish state funding. Spare a thought for our own beloved orchestra: along came a letter from the London Orchestral Board saying that their funding would go instead to the more established orchestras. The LCO had actually been there longer than any of them!

And spare a thought for poor Hazel Thornton.

The most thankless job in the world?

Who’s she, you ask? A young mum of two, from Slough, she must have been a contact of Stanley Pope, who took over for a short while as principal conductor; clearly he had asked her if she could help out a bit. Poor Hazel unwittingly agreed. She ended up doing everything – literally everything – from organising the soloists’ trips to booking the halls to organising spaces in the artists’ car park.

She wrote around to innumerable choral societies and music societies offering the orchestra’s services. She dealt with the placement of advertisements and the Royal Festival Hall’s monthly diary listings. There were exchanges of correspondence about the concerts’ content, plans for a season of six events at the Queen Elizabeth Hall, reams of paper expended on the preparations for these – and ultimately they were all cancelled when enough support was not forthcoming. Hazel ploughed on. Unpaid.

The vagaries of the climate and the competition from all those other chamber orchestras meant that all she had to show for her efforts was…two concerts at the QEH, one of which was all Mozart.

Hazel eventually became a research scientist. I can scarcely blame her for leaving the world of arts management far, far behind. As for Stanley Pope, he eventually set up…his own chamber orchestra.

Things could only get better…couldn’t they?